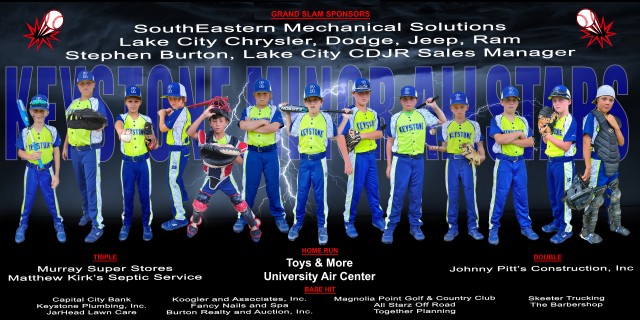 Keystone Minor All Stars bring home the Small League State Championship title!
Keystone Heights Sports Association All Star Minors (10-U) were named state champions after a hard fought battle in Fort White this week between 16 different 10-U teams hailing from across the state of Florida.
The 2021 Florida Small League State Tournament began on Saturday, June 19th and the Keystone Heights Minor All Stars arrived prepared to dominate. Led by Managing Coach, Eric Martin, and Assistant Coaches, Bryce Wilson and Trey Ross, the Keystone Heights Minor All Star team took their first win of the tournament against the Middleburg Broncos 9-3 on Saturday. Sunday’s game ended in an 18-0 shut-out against Dixie County, followed by another win on Monday against the Union County Tigers with a final score of 9-0—sending them to the semi-finals on Tuesday. There they would face-off with Green Cove Springs’ “The Cove” in an early morning fray, vying for their spot in the championship game. With a final score of 5-3 Keystone Heights Minor All Stars advanced to the championship game! They would be fighting for the coveted state title against Orange Park Crush.
Inclement weather had been a factor throughout the entire tournament and Tuesday was no exception. After a six hour rain delay and heavy consideration by the tournament directors, the Small League State Championship Game was deemed unplayable due to field conditions and weather forecast and therefore, canceled. Champions were selected based on the current rankings and the Keystone Heights Minor All Stars were crowned the STATE CHAMPIONS on account of their hard work throughout the four day tournament achieving the higher seeding with only six total runs allowed in four games.

Congratulations to Keystone Majors All Stars for bringing home the District 5 Championship title!

Cheer them on as they head to Jacksonville July 1-4, to compete at the Northern Florida State Tournament. Let's Go Keystone!

2021-03-17
We had an AMAZING start to our spring season this past weekend. Just a little dreary but a LOT of fun! Check out our highight video.   We could not do the things that we do without the support of our community! Thank you to our board members, coaches, parents, and volunteers. A special thank you goes out to these supporters:
1st Coast Recycling, Inc.
Melissa Pellerito Florida Homes Realty and Mortgage
Melissa Pellerito Family
Atlantic Logistics
Comfort Temp
Whitton Roofing
Vulcan
Trinity Baptist Church
Trevor Waters Realty
Sunbelt Rentals
Vojo Production
A Child's Garden
Magnolia Point
Perry Roofing Contractors
Clay Electric
Lake Area Small Engine, Inc.
Signs of Summer
Fryer's
Lake Region Kiwanis Club
2021-02-03
Good evening KHSA friends and families. Click the link below for the Clay County Finance and Audit Committee Meeting. Listen in!
Item 6 on this meeting's agenda is the Five Year Park Lease Agreements and Lease Approval Resolutions. This proposed lease will directly affect our organization and programs. We want you to be informed and have opportunity to participate in our local government processes.
22:00 Item 6 is presented
42:00 Listen as our District Commissioner gives comment
https://www.facebook.com/ClayCtyBCC/videos/746532706279409
External links are provided for reference purposes.KHSA BABE RUTH LEAGUE is not responsible for the content of external Internet sites.
CopyrightKHSA BABE RUTH LEAGUE All rights Reserved. Privacy Notice
Sports League Management Software byBabeRuth